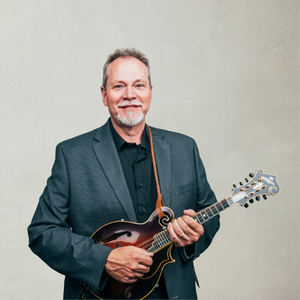 Danny Roberts began playing guitar to back up his friend Jimmy Mattingly when the two were growing up on adjacent farms in Leitchfield, KY.  Soon he was winning contests on his own as a guitarist and, eventually, mandolin player. In 1982 he co-founded the New Tradition, a dynamic, ground-breaking bluegrass/gospel group that toured the country for close to 20 years (the last ten on a full-time basis), recorded ten CDs, made “Seed Of Love, ”the first bluegrass video to feature the banjo – it reached #1 on the TNN channel – appeared on the Grand Ole Opry, and helped to bring the bluegrass sound and gospel message to a new generation of fans. When the group dissolved in 2000, Danny went to  work for Gibson Musical Instruments, where he rose to the position of plant manager at the company’s Original Acoustic Instruments luthiery. Still, he kept his hand in as a musician, giving workshops with mandolin colleagues like Sam Bush, Chris Thile and Bobby Osborne, making guest appearances with artists such as Marty Raybon, Larry Cordle and Melonie Cannon, and touring and recording with bluegrass/country veteran Ronnie Reno as a member of his band, the Reno Tradition, before reuniting with Mattingly in The Grascals in 2004. His first solo recording, Mandolin Orchard, received extensive airplay and was touted by the Chicago Tribune as one of the Top 10 bluegrass releases of 2004.  Roberts has also been honored with five SPBGMA Awards for Mandolin Performer of the Year as well as three Grammy nominations with The Grascals and multiple IBMA awards including two Entertainer of the Year awards.

Danny makes his home in Murfreesboro, TN with his wife, Andrea, and daughter, Jaelee.